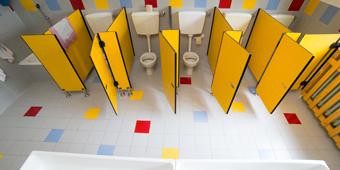 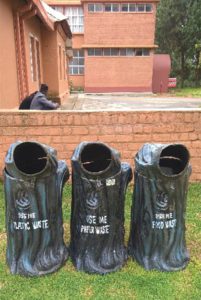 Ekya is a private school with a tasteful, clean campus with large open spaces. The interiors of the building is designed so that a lot of natural lighting streams inside. The campus is tastefully done with a lot of emphasis on cleanliness and aesthetic beauty. The floors were sparkling clean with no dust or litter. There were plenty of plants at different locations creating a perfect balance between concrete and greenery. There was innovative small seating arrangements for students to gather informally outside of their classrooms.

We observed that the school had several good practices worthy of replication, especially in sanitation. The school management has gone an extra mile keeping kindergarten and little children in mind and has invested in toilets suitable for their size. The toilet seat and wash basins were adjusted to the height of kindergarten/ very young students.

Other innovative practices they have used is putting up cartoon signages to reinforce and remind children regarding proper use of toilet. Readily cut newspaper strips are hung in the girls’ toilets for disposal of sanitary napkins. Other than sanitation, they have put into practice, the concept of recycling such as upcycling of old tyres into seating and use of aerated drinks bottles into planters.

4) Catch up through External Intervention Let’s Do Some Good Foundation, Bangalore (LDSG) 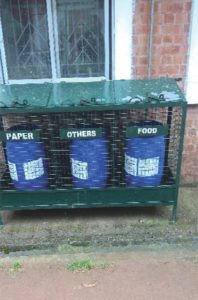 This trust founded social entrepreneur Shoma Bakre has seamlessly tied up with various NGOs in Bangalore and created effective Bridge schools. Bridge schools take in, out of school children and train them rigorously for a year so that they can join an age specific class either in an English medium school or a Government School. Partnering has been done with corporates, academia, NGOs, hospitals and any other expert required at a point of time. This collaboration is called the ‘Bangalore Effective Education Task Force’. They found that government school infrastructure was under-utilised and took up rooms for the bridge schools.

However, sanitation was a huge problem. They supported an initiative by high school students called the ‘Build a Toilet’ (BAT) project and built or renovated 12 toilets in a local government school. They also collaborated with ‘Anatta – a social initiative’ started by the former Miss India runner up and architect, Sushruthi Krishna as the social partner in the BAT project.

Anatta designed the 4’X 4’ toilet block and has limited the unit price to Rs 20000/- by using Solid cement blocks and polycarbonate sheet roofing (Pic 20). They are also making sure of the proper drainage and are constructing soak pits along with educating the kids about hygiene. To reinforce messages on how to use a toilet, importance of hand-wash and to maintain the cleanliness on toilets they used the concept of ‘Wall Talks’ where these messages with appropriate art work was used on the walls of a toilet.

1. Security of Schools: Each school must be provided round the clock security. In most private schools, there is somebody manning the gate to screen visitors and a guard even at night for safety of the school property. However, in some of the government schools we visited there was no security staff. In many schools even compound walls were missing. This is a clear invitation for miscreants, vandals and drunkards who come in and misuse the property and damage it. Toilets are the first places to get damaged and items get pilfered from there.
2. School is Not a Public Property: Government school buildings and the land surrounding is owned by the various state government. This makes the people in authority to make use of it for purposes such as public rallies and even conduct their private functions. Each activity like this generates a lot of waste which is then never cleaned up and the schools have to deal with the mess. NGOs must put pressure on governments not to allow this.
3. Hiring of atleast one female staff: In many schools, especially far-flung ones; e.g. tribal areas of Rajasthan, there are no female staff on rolls. This is because of the inaccessibility and poor public transport to reach the place. In a co-education school or in an all-girls school, the presence of a lady teacher instils confidence amongst parents and students.
4. Ratio of students to toilets: According to several experts the minimum ratio of students to should be 1 toilet or urinal to 25 students (1:25) in a country like India. The rationale was that the environment can become contaminated more easily with multiple simultaneous users of urinals, because at least one of the children may assume an offcentre position in relationship to the fixture during voiding. Also young children use the toilet frequently and cannot wait long when they have to use the toilet. In this scenario, typically boys use the walls or trees in the campus 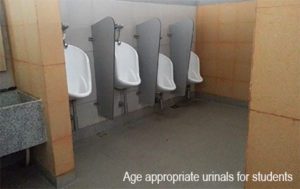 5. Training children to use a toilet: In the Focus Group Discussions, one of the points highlighted was that due to improper usage of toilets by students, the toilet was rendered unusable for the next user. Also when students do not use a toilet properly, it deteriorates quickly and it becomes a challenge for cleaning staff to clean it. Hence, proper usage of toilets have to be reinforced periodically to all students in tandem with use of soap and water for handwashing.
6. Cleaning staff and cleaning material: In many state government schools there are no funds allocated for cleaners or the salaries are very low for the job. Hence, nobody wants to try and get a job as a cleaner in a school. There was also a lack of dignity of labour in this job. In many schools students themselves cleaned the classes as well as the toilets. In some schools cleaning agents and disinfectants were regularly pilfered. This has to be checked by keeping an inventory and usage of items per month. In Mumbai municipal schools, the cleaning and security was outsourced to a housekeeping organisation who were paid by the Mumbai Corporation. This was a good model as the corporation did not have the responsibility of having more people accountable on their payrolls and a private organisation was doing this job well. Many corporation/ government schools can adopt this model and this also prevents corrupt practices.