The making of a Green Village

Beside a beautiful hillock under the rolling clouds amid rustling winds and lush greenery is the eco-village developed by social activist and Sangli Zilla Parishad member Subhash Patil.

Hatnur, located in the Sangli district of Maharashtra, having a population of about 5000, has been nurtured with the concept of sustainable development.

“The principles of conservation, sustainability and community empowerment are ingrained in aspect of the eco-village. With the help of the local self-government and the villagers, we have undertaken pioneering measures to create a sustainable ecosystem by working with the community,” says Subhash Patil.

Since Hatnur is a drought prone area, it receives scanty rainfall and water table was very low. “The watershed development programmes by Agriculture department, KT (Kolhapur Type) WEIR by Water Conservation Department, storage ponds facility by the agriculture department of the Government of Maharashtra has helped in raising the water table levels of Hatnur village. We have highest number of storage ponds too. Earlier, the water supply for drinking and cultivation used to last until February end but now we water until April-end. The village has community tanks with a capacity of 90,000lt and 70,000lt which supplies water to over 820 homes.”

In an attempt to conserve water, the wastewater flowing through the closed drains down the slopes is treated at the wastewater treatment plant, where it goes through processes like segregation of suspended solids and treated with natural chemicals (bacteria/enzymes). The clean water then passes through the porous media to various ponds. This water is used for plantation through drip-irrigation or sometimes taken in tankers to water the plants. Around 10,000lt is treated daily. The overflow water of the water tank is again stored in a small tank and used for plantation and for cattle.

A lot of research has gone in the installation of the treatments plants. “I took the help of Shiv-Sadan Consultants, Executive Engineer Ramdas Tambe of Pimpri-Chinchwad Municipal Corporation and local company VAC technologies in Sangli for setting up the plant. The Gram Panchayat is currently operating two such plants,” says Subhash Patil, a civil engineer and a post graduate in management. 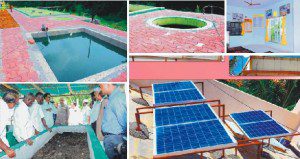 The Hatnur Gram Panchayat has developed a system of ghanta-ghadi under which the bio-degradable and non-degradable wastes from the individual houses are collected in two shifts. This waste is then mixed with cow/buffalo dung and transferred to the vermi-composting pit for further processing. Hatnur village has around six vermi-compost pits. Subhash says, “The manure produced from the pit is sold to farmers for `4500 per tonne. The pit has a capacity to produce five tonnes of manure every 45 days. The revenue generated adds up to the Gram Panchayat fund.

“We have also provided bamboo dustbins to every house. These dustbins are eco-friendly, and in a way we also popularize the traditional dying art and generate employment for the village artisans.”

The village has renewable energy too – both solar and wind. The gram panchayat office, the anganwadis and the computer lab in primary schools run on solar energy. There are around 25 streetlamps that run on windmill (1Kw capacity) hybrid energy. Provision for four induction lamps has also been made for important functions in the village.

The gram panchayat has put in `2 lakhs from its fund and `1 lakh subsidy from the central government for installing the wind energy. Four induction lamps, which give an output of 400watt with input of 100watt have been installed in public spaces.

A lot of emphasis is given to education, sanitation, cleanliness and hygiene. The village has received 17 awards in different categories that include Sant Gadge Maharaj Gram Swachtha Award, Nirmal Gram Puraskar and other State and national awards. “Every house has been provided with a pucca toilet. The village is also equipped with public toilets both for men and women.”

“The Primary Health Centre is well-equipped and checked for hygiene levels by a designated health officer. The schools already have water filtration systems and we are in the process of constructing RO system for the entire village.

In an attempt to turn the place green, three years back, the villagers have planted around 5000 saplings. Today, in all there are around 30,000 trees banyan, tamarind, lime, drumstick, neem, ficus, all types of palms, fruit bearing trees such as jambul (Rose apple/Java plum) and flowering trees such as gulmohar (Flame tree)… There are also exotic plants like Orchids, Kanchan (Geranium tree) and Bougainvillea too. These trees have a lucrative business potential in the future and help sustain the village’s green initiatives.

Besides enhancing the scenic beauty and commercial value of the village, every stone laid to make this village has a story to narrate. Structures made of natural stones, the small bridges, the tall trees… are breathtaking.

“Looking back on all the hard work put in, this would not have been possible without people’s participation,” says Subhash. Hatnur has today achieved its status of ‘Green and clean village’.