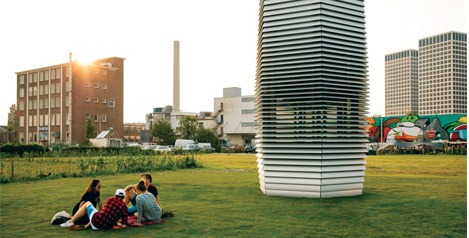 [box type=”shadow” ]In India’s submission to the UN, known as Intended Nationally Determined Contribution (INDC), Prime Minister Narendra Modi has promised to reduce the carbon emission by 35%, to be achieved through clean sources of energy. However, no stress has been laid on the existing ‘Gas Chambers’, as commented by Delhi High Court. Dr. S. S. Verma, Department of Physics, S.L.I.E.T., Longowal-Punjab explores the smog effects and smog free tower technology.[/box]

RAPID RISE in air pollution all around and in cities in particular has worsened smog occurrence and extended its duration. Smog is basically derived from the merging of two words; smoke and fog. Smog is also used to describe the type of fog which has smoke or soot in it. Smog is a yellowish or blackish fog formed mainly by a mixture of pollutants in the atmosphere which consists of fine particles and ground level ozone. Smog which occurs mainly because of air pollution can also be defined as a mixture of various gases with dust and water vapor. Smog also refers to hazy air that makes breathing difficult. The atmospheric pollutants or gases that form smog are released in the air when fuels are burnt. When sunlight and its heat react with these gases and fine particles in the atmosphere, smog is formed. It is purely caused by air pollution. Ground level ozone and fine particles are released in the air due to complex photochemical reactions between Volatile Organic Compounds (VOC), Sulphur Dioxide (SO2) and Nitrogen Oxides (NOx). These VOC, SO2 and NOx are called precursors. The main sources of these precursors are pollutants released directly into the air by gasoline and dieselrun vehicles, industrial plants and activities, and heating due to human activities.

We all know about the concepts like less cars, clean technologies, more bicycling, etc. but somehow we are still stuck in this polluted situation. It can be reduced by implementing modifications in present day lifestyle, i.e., by decreasing the consumption of non-renewable fuels by replacing them with alternate sources of fuel which will reduce toxic emissions from vehicles. Instead of vigorous efforts and debates, occurrence of smog is not stopping and everybody is looking towards other to make his/her activities environmental friendly but without much success. Therefore, methods to remove smog creating pollutants along with stopping the activities to produce these pollutants should be looked into in order to control the smog for a livable environment. Dutch Artist Daan Roosegaarde has come up with an idea of smog free tower. The device extracting this pollution powder has been named a Smog Free Tower which is a 23-foot-tall air purification system at present with a cost of $54,000 meant to clean up parks and other public spaces. The seven-metertall tower runs on green energy and cleans 30,000 cubic meters of air per hour of ultra-fine smog to create smog-free bubbles in public spaces.

The technology powering the Smog Free Tower is based on airpurification systems in hospitals often use to clean air – attracting particles of pollution through static electricity – but on a larger scale. The Smog Free tower cleans the air by sucking in smog from the top and releasing filtered air through its six-sided vents. By charging the Smog Free Tower with a small positive current, an electrode will send positive ions into the air. These ions will attach themselves to fine dust particles. A negatively charged surface – the counter electrode – will then draw the positive ions in, together with the fine dust particles. The fine dust that would normally harm us is collected together with the ions and stored inside of the tower. This technology manages to capture ultra-fine smog particles which regular filter systems fail to do.

Every ring holds as much smog as 1,000 cubic meters of city air. As people visit the tower, it is designed to be a place to talk about how to make the larger changes that are necessary to prevent air pollution in the first place. Pollution particles contributing to smog are mostly made up of carbon therefore once smog is sucked out of the air, Roosegaarde decided to compress them into jewellery in a nod to diamond. The tower will produce 3,500 smog cubes per day if it’s in an area with a lot of air pollution, and each one of the cubes cleans over 35,000 cubic feet of air – ideally translating to nearly 123 million cubic feet of clean air per day. The giant smog-sucking vacuum cleaner runs on just 1,400 watts – no more electricity than a water boiler – using a low-energy patented ionization technology and LEDs to make the tower glow at night. It creates bubbles of clean air around the tower and people can experience clean air for free, and sense what a clean air future is. The tower as a ‘clean air temple’ so it has a strong iconic but also per formative value. It captures the ultra-fine smog, something standard existing systems cannot capture yet.