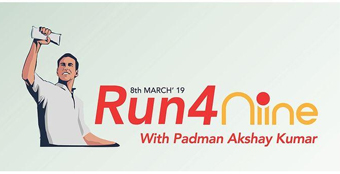 Bollywood actor Akshay Kumar along with the Niine Movement is calling upon all the Pad Heroes across India for the nationwide running event Run4Niine. The event will take place in hundreds of cities across 20+ states in India on March 8 to mark International Women’s Day. Some of the states where runs have been confirmed include Uttar Pradesh, West Bengal, Uttarakhand, Bihar, Haryana, Goa, Jharkhand, NCR, Orissa, Andhra Pradesh, Madhya Pradesh, Rajasthan, Gujarat, Chhattisgarh, Telangana, Tamil Nadu, Karnataka, Kerala, Maharashtra, and Punjab.

The campaign aims to bridge the gap between sanitary napkin users from 18% to 82% bringing together both genders, across all ages, backgrounds and of all abilities. Online registrations have already begun for the event which is set to become India&#39;s largest nationwide run for menstrual hygiene awareness, with the hope of setting the Guinness World Record for organising the ‘Largest Number of Runs in a Single Day for Menstrual Hygiene Awareness’.

Speaking about his association with Run4Niine, Akshay Kumar said, “It’s already been more than a year since the release of Pad Man, and I am proud to see how it has evolved into a phenomenal grass roots level movement. Once again, I am excited to be partnering with the Niine Movement to encourage an open and unashamed discussion on menstruation with my fellow citizens, pad heroes, change makers and pathbreakers for the Run4Niine. Each one of us that takes part in Run4Niine helps to create an unstoppable force that will beat the stigma around periods.”