IHS 2018 was a forum where housekeepers from different nations came together and discussed their concerns and sought for solutions. Getting so many housekeepers together at one time and one place was a great effort done by Clean India. United we stand in the face of diversity was put forth very well. New friends, old acquaintances, ex colleagues and future good friends all together was what we became which will reap its fruits by making the housekeeper community strong and helpful. IPHA contributed to it a lot as well by connecting and making teams to assist and guide at each step of reaching the venue. Sri Lankan tourism gave us a very fabulous and crisp tour of the city which was planned very well. Thanks to each one who worked in the background making IHS a success. Cheers!!

The session ‘Targeting Training Needs’ — a spin-off on the leadership concept from the book When the Penny Drops by Gopalakrishnan. It commenced with the world of getting things done i.e. Process, then addressed the aspect of the inner world relating to People and in the final segment focussed on the external world of relationships with others – People-to-People.

Opening the three-part session, Amal Nanayakkara – HR Consultant, Sri Lanka gave a presentation on Creating SOPs. Drawing an amazing analogy between the success of a nation and the success of a department, he pinpointed the reason why nations are successful – “The difference is in the attitude of the people modelled for many years by education, moral responsibility and culture.” He drew a parallel with the statement, “In our industry of hospitality related to tourism, an SOP is fundamentally the rules and regulations on which the department would be managed — a management that will be effective, purpose driven and customer oriented. An SOP needs to be based upon this fundamental principle. The purpose of an SOP is to provide detailed instructions on how to carry out a task, so that any employee, can carry out this task correctly, every time.”

He pinpointed the need to combine enthusiasm with experience using an appropriate old Irish saying, “A new broom sweeps clean; but an old broom knows the corners.”

The next segment dealt with ‘people’, addressing the Grooming and Attitude of Housekeeping Staff. The session was introduced by a somewhat bizarre film revealing the poor attitude of the staff when cleaning a guest room. Anupama Deshmukh, Independent Trainer and Consultant, gave a presentation on ‘Creating Impressions in Housekeeping’. She led the discussion into a debate – “Which is more important in creating impressions in Housekeeping – Grooming or Attitude?” Speaking for Grooming were Nedra Wickremesinghe – Executive Director, Arden Institute, Colombo and Ekaterine Kvirikashvili, Executive Housekeeper, Champa Central Hotel, Maldives; and supporting attitude were Mubitana Siba, Executive Housekeeper, Kurumba, Maldives and Saravan Kumaran, Director of Housekeeping, Oakwood Residences Kapil, Hyderabad. After a few moments of ‘he said, Session IV:she said’, the debate concluded with a live polling by the audience which revealed that they were strongly in favour of attitude.

The conclusion of this session was perhaps the most innovative – in a format that has never been done before. This segment of the session addressed issues of people-topeople referring to the co-ordination between departments and employees. A case study via a role play was presented to the audience. Scripted by Avril Sule, directed by Irandi Wijegunawardane and enacted by 11 talented assistant housekeepers of the Aitken Spence Group of Hotels, the play presented everyday conflicts between Housekeeping, Front Office and Maintenance. The performance was a great success and kept the audience involved and interested. The follow-up case study questions drew audience opinion on what went wrong and what could have been done better.

First of all, I would like to congratulate the entire I-PHA and Clean India Team for putting together an amazing show – IHS2018.

“It has provided a platform to exchange ideas and knowledge not only from the seasoned Housekeeping professionals from across the globe but also given voice to the upcoming, young minds who think completely different from their predecessors and have completely different ambitions and aspirations from their Housekeeping careers. A melting pot for ideas from yesteryear experience versus the new technology knocking on our doors, an amazing experience altogether. A great initiative which needs to grow from strength to strength in coming years!!!” 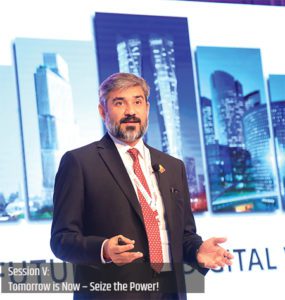 Session four ‘I, Me and My Room’ was also an out-of-the-box idea linking guestroom design with brand standards. Without a doubt, no level of service or glamour can equal the sensation a guest feels when entering a well-decorated, spotless, tidy and conveniently arranged room. In conversation, Hirante Welandawe, Managing Director, H W Architects Pvt. Ltd and Shanez Wijesinghe, Asst. VP, Brand Quality Assurance, Cinnamon Hotels & Resorts, revealed perspectives that could assist in closing the gap between Housekeeping and Interior Design thereby improving service standards. Shanez said, “Brand perspective of standards pertaining to Housekeeping must be co-ordinated with the architect at the beginning when the architect’s brief is being done by the management. Housekeeping cannot get involved later on when the project starts. Housekeeping must identify minimum requirements of storage spaces as this cannot come later on the wish list.” There is need for a constant dialogue between the Management, Housekeeping and the Architect to formulate a comprehensive architect’s brief. Hirante empathised saying that architects must look at the human and mechanized efforts involved in cleaning and the fact that it adds to the maintenance budget at some point.

Shanez expressed her belief that, “by providing a clean guest room, the Housekeeping department has an opportunity to create guests who are raving fans despite being behind the scenes.” Having discussed the need for design to be practical in terms of cleaning, Hirante went on to say “Rather than throw away the brand idea, it is always possible to use lateral thinking and solve the problem because the main point is to maintain the brand idea. This can be done by balancing the pros and cons.” Shanez re-iterated that “iconic products should not be discarded if they supported the brand idea in creating a different experience.” Shanez concluded the session by stating the two key points – a set of documents identifying everything in advance and the fact that Housekeeping has the opportunity to create raving fans out of guests. The delegates expressed that they wished that this was a regular practice followed by all hotels.

Pages: 1 2 3 4 5 6
Each year, America celebrates Independence Day on July 4. This year was no different except that on the other side of the Prime Meridian, the 3rd International Housekeepers Summit was being attended by over 300 delegates of 14 nationalities at the Shangri- La Hotel in Colombo, Sri Lanka. The celebration by Asia’s Housekeeping Professionals was a two-day event filled with educative sessions, debates, workshop, interesting activities and of course, the 3rd Asian Housekeeping Awards. Avril Sule takes you on a journey of the two days of the Summit, which witnessed the coming together of professionals who believe and cherish housekeeping.&hellip;

Previous: Fashion Show of Uniforms
Next: High-Rise Painting How to find the right Contractor?

Party on the Platform

Changing the face of FM the digital way