I recently read in an article that every restaurant in the UK – from the finest Michelin star establishments to the local corner café – is going to be graded with a cleanliness rating. Customers will be able to check on everything from mice droppings to cookers caked in grease, as hygiene levels in the kitchens of all restaurants are detailed on the internet. Restaurant owners will also be asked to display their hygiene record on the premises as part of the “scores on the doors” offensive being promoted by the Food Standards Agency. If the “scores on the doors” take-up is poor, laws are planned to force owners to disclose their rankings at the restaurant.

The move by the watchdog is aimed at bringing down the number of food poisoning cases in Britain and to give consumers more information to help them decide where they eat out. Hygiene ratings already exist in the United States, Canada, Australia and New Zealand. India, which records of a large number of food poisoning cases, has been generally negligent about enforcing standards and meting out punishment to offenders even though it has a food and drug administration in place.

To begin with two McDonald’s outlets were visited in Vashi – one located at Sector 17 and the other within the Centre One Mall. It was late in the evening and the crowd was just beginning to thicken. At the Sector 17 outlet, there was a small kiddie party going on while the rest of the patrons were either seated or waiting in queue. The boisterous crowd kept spilling soft drinks, tossing crumbs and skidding around in an effort to derive the maximum fun and enjoyment out of the party. The person who was assigned the cleaning was already looking harried and stressed out. Yet the job was being done with efficient regularity. I noticed the gloves were off a few times in between swabs and the uniforms were looking pretty frazzled and messy by the time the party was well on its way. A rag was used to clean up the wet mess and the mop was rotated around the floor smoothly to clean up the rest. There was just minimal soap and water being used. The mop looked dirty to start off with and by the time the job was done it was a dark shade of black. The girl then took the mop back into the restroom area. After a few minutes, she was back with the mop looking a bit cleaner and squeezed well enough to keep the water residue minimal.

My attention then moved to the main counter which fronted the semi-kitchen, formed entirely of racks of reinforced steel. The area was clean and sparkling. All the food handlers wore gloves and aprons. There was no direct skin contact with any of the food items being served on trays. The burgers were wrapped in oil paper and the fries were ladled into Mc envelopes with the help of a spatula. Even though I spent almost two hours observing the whole process I did not see any of the gloves being changed. I made a visit to the restroom which after several footfalls looked quite messy and there was a distinctly strong odour permeating the atmosphere there. I requested the staffer to clean it and she was prompt enough to do the needful without much ado. On revisiting, the place looked far more inviting & clean and the odour seemed to have vanished too.

All food service outlets need to recognise that hygiene issues must be given number one priority for consumer protection. Good standards of hygiene are not a luxury – they must be a fundamental practice.

The same routine was followed at the Centre One outlet which was located on the third level of the mall. Here, the food court had other providers in competition, but the McDonald’s staff seemed the most diligent and cleanliness conscious. The other outlets, which shared the same open space used by customers, did not seem to be very interested in cleaning the tables or dumping the left-behind waste into the baskets provided. The Mc staffer did most of the cleaning and mopping. There were no mechanised cleaners being used – just wet and dry mops and table wipes. I visited several other Mc outlets from Kalamboli in Navi Mumbai to the one in Vile Parle east and found the standards of hygiene and cleanliness much the same all around. Of course, there is still scope for improving standards. However, there was a certain consistency involved in the manner in which the job was being done.

The KFC (Kentucky Fried Chicken) outlets at Inorbit Mall in Vashi and Hiranandani, Powai, have similar cleanliness routines. Despite having larger spaces, these outlets too follow the manual cleaning route. Pizza joints like Smokin Joe’s and Dominos as also the Falafel outlets follow similar standards of hygiene and cleanliness. Reena Francis, a lecturer by profession, loves to try out KFC on weekends. Question her about the cleanliness standards and she says, “I think almost all such multinational chains have a high standard of cleanliness and hygiene. I have no complaints about KFC. Their kitchen area looks immaculate from where I am sitting, their servings are tidy and their staff is always on the go.”

It’s quite interesting to note that the advent of multinational fast food chains have brought forward a differing perspective on cleanliness and hygiene standards to be maintained by food serving outlets. But standards in the Indian outlets still lag far behind.

According to WHO, more than 100,000 food poisoning cases are reported to GP’s every year and this the doctors say is just the tip of the iceberg. Doctors estimate the number of reported cases amounts to just a miniscule percentage of the actual number of those affected by contamination in food

Cannon pav-bhaji stall, a popular eatery bang opposite the headquarters of the MCGM building, has its staff doing everything from chopping vegetables to cooking and cleaning without the use of gloves. The sponge used for cleaning the longish steel table looks like it has seen better days. Drinking water is obtained from a well in the precinct, while the steel plates and utensils are cleaned using axiom cakes.

While the fast food chains imported from the West cater to the upper middle class, joints like Cannon, the zunka bakhar stalls and movable stalls that serve a variety of street food all across Mumbai cater to the lower economic classes and therefore, may have to put in workable systems to maintain cleanliness and still remain affordable to the clientele. On the other hand, in a small country like Thailand, the variety of street food available and the cleanliness standards are incredible. Even the US travel advisories recommend countrymen to try out the street food there as there is no fear of any contamination whatsoever. The food is completely covered, the mobile carts are made of steel and fitted with umbrella shades. They also have separate containers for storing fresh ice water and water for washing utensils. They don’t use gloves on the streets but every food item has its own container & spoon and the contamination is kept minimal as the food never comes in direct contact with the skin of the person serving it. The street vendors are all neatly dressed and well groomed. You couldn’t catch them dead with dirty fingernails or stained aprons. Even the area surrounding the food stall is immaculately kept. The waste bins are covered and you wouldn’t be able to spot a single fly hovering around. As far as India goes, our fast food joints and street foods stalls are yet to generate confidence among tourists or NRIs coming for holidays.

My next port of call was the railway station eatery. I visited the new Re-fresh outlet that was inaugurated a few months back as part of the IRCTC’s new vision regarding upgraded services to be provided for the commuter. The eatery is located adjacent to the public toilet and more often than not it’s in a place that gets permeated by the acrid odour of human urine. Powerful fans have been installed to keep the odour at bay but it’s not effective enough. Relocation might be the only solution. Re-fresh though is quite a pleasant surprise if you can overlook the location. The décor comprises of stainless steel counters, glass enclosures and steel utensils. The food is kept covered at all times and it is reheated & served to the customer. The cleanliness routine though is irregular. You can see visible stains on the tables, the customer leftovers are not cleared off immediately and the mopping exercise is ineffective. The floor looks dirty and stained. There’s very little room for movement within the eatery and at the ground floor level, there are no seating arrangements. Cleaning staff don’t seem to be around much. Though in uniforms, the guys manning the counters and collecting the used utensils seem extremely frazzled and unkempt. It must be understood that the number of footfalls they cater to on any given day is 10-15 times higher than any McDonald’s restaurant in the city. The sheer number of clientele that throngs the counters, renders any concerted cleaning regime ineffective.

Churchgate station boasts of Wimpy’s and several small vendor outlets that serve a variety of fast food like wraps and patties. Wimpy’s, in fact replaced a Chinese outlet which was pulled up by the IRCTC (read interview) and its licence was suspended. Today, Wimpy’s exists in that space. Wimpy’s is more or less a down market version of McDonald’s but the prices are relatively higher. The place is not air-cooled and the fans are inadequate. Food though is served piping hot, there’s just one person moving around to do the cleaning and in spite of the relatively low turnover, he seems to be above his head. The place looks shabby with chipped/cracked flooring tiles and generally tables being kept unclean. The counters are of steel and so are the tables, but the slow cleanliness regime seems to be a problem.

The food court at Bombay Central station has Rajdhani and McDonald’s side by side. The space is large and just one person handles the cleaning up operations at any given time. There’s a high turnover here and despite the self-service tag, the area doesn’t look as clean and presentable as it could have been.

Everybody loves to eat and eating becomes even more pleasurable when the food is hygienic, healthy & safe and is served in an environment that keeps it safe from contaminants. It is all the more attractive when we know that the food is prepared and managed by sophisticated and the best quality machinery and it is ready to eat instantly. 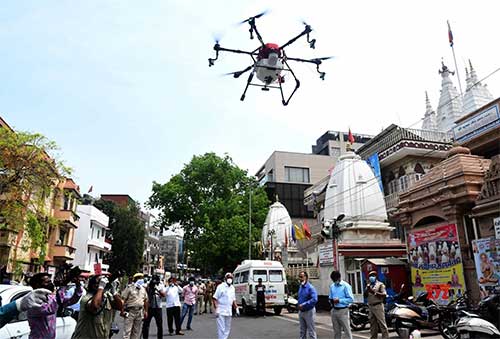 Drones deployed for sanitisation in Varanasi