DRDO takes a leaf out of a book on urban sanitation

Prior 1982, when Indian Army was deployed in the Siachen Glacier, it became very difficult to degrade the human waste, as the temperature was below (-) 70 Degree Centigrade. In 1991, Defence Research Development Organization (DRDO), the premier agency working under the Ministry of Defence for development of defence technologies took up the job of developing a technology to overcome this problem. The agency experimented over a period of over 10 years with different types of bacteria, which could degenerate waste on high altitudes.

The prototype of the technology came into existence in 2011 and was patented the same year. The technology developed used Anaerobic bacteria that did not require oxygen and degraded waste anaerobically into methane and water. The technology became widely known because of its efficiency and cost effectiveness. As of today, Indian Railways has introduced this technology in seven trains.

As per the technology, tank is fixed under the commode based on the patented design. Bacteria are filled in the designated chambers, which are connected with an outlet through which waste water finally comes out after the degradation process. Tank installed should be of the dimension of 0.7sqm. For a toilet catering to 50 to 60 people – the tank size requirement is of two cubic metre; to cater to a family of 20 people, one cubic metre and for a general household of four to eight people, the requirement is 0.5 to 0.6 cubic metre tank size. Around 40% of the tank is occupied by the bacteria for the process.

One litre of the liquid solution comprising bacteria costs only 10. Too much flushing should be avoided to retain the bacteria for a life time, lest it will wash out. It does not require much water and no power supply. It is an effective substitute for sewerage system. It is a one time investment and the cost for installation of the system is 15000 per household. 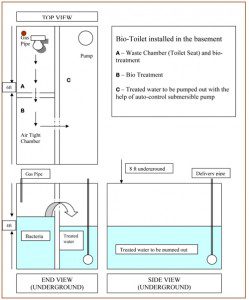 It is a sustainable technology and helps minimize water usage. Bacteria replacement is not required in this technology. Though, aerobic technology, which works on the same lines is available abroad, it comes with a recurrent expenditure as the bacteria need to be introduced in the tank twice a week for degrading waste.

Railways has plans of introducing 10,000 bio-degradable toilets every year. A public toilet has been running successfully on this technology for two years in front of the railway station in Gwalior. Bad odour in the station has been eliminated completely.

DRDO manufactures the chamber and develops the bacteria in its in house facility. The technology has been transferred to 40 TOT holders or firms across the country. An MOU has also been signed between the firms and DRDO to provide technology to the end users. Railways, Alfa Therm – New Delhi, CBS Technology – Delhi, SB Equipment, Escort India, Omax Auto, Darshan Enterprise etc. are some of the major TOT holders.