Haryana will soon have a large scale biogas plant and bottling facility for use in cooking, transport and fertilizers. The Union Ministry of new Renewable Energy has sanctioned the project to set up a biogas fertilizer plant at Shri Haryana Goshala, Hansi, Hisar. This would be the first plant of its kind to be installed in the country. It would have high rate bio-methanation digester fitted with special patented technology called Induced Blanket Reactor (IBR) developed by Utah State University, US. It would have digester retention time of just five days in comparison to 30 days for conventional biogas digesters and would generate 1000 cu.m. biogas and 3.96 tonnes of bio-fertilizer per day. The biogas generated would further be purified into 96% methane, out of which 200cu.m would be used for power generation and remaining would be bottled in Bio-CNG cylinders to be sold at the rate of Rs25 per kg. The provision of bottling of extracted carbon dioxide from biogas would also be made which would be used for industrial purposes. The raw material i.e. cow dung for the project is expected to come from the nearby Haryana Goshala. 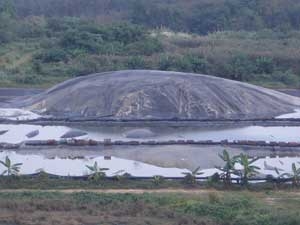